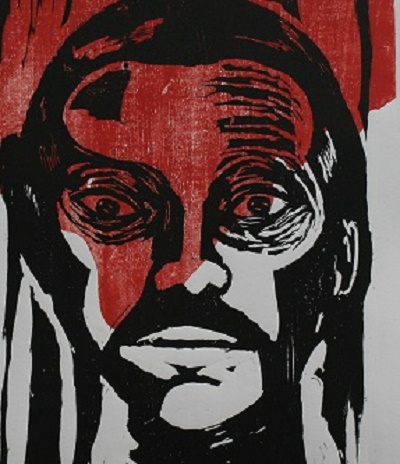 Poems by   Damon Bazzeghin, influenced by his experience in the Vietnam War

Collateral Damage is a woodcut series illustrating poems written my step father, Damon Bazzeghin, which were influenced by his experiences as a combat infantryman in the Vietnam war. Damon served with the Americal Division of the US Army in Vietnam from January 9, 1968 – October 16, 1968; his tour ended with multiple gunshot wounds Vietnam in 1968. Among the many metals Damon received for his service are two purple heart awards.

Damon attended the play No Background Music, written and performed by Normi Noel, in August 2008, about Vietnam veteran nurse Penny Rock’s journey through trauma to a place of healing. Damon brought the play back to the Springfield area, and co-produced it, at the Majestic Theater in the spring of 2009.

Inspired by Penny Rock, Damon began writing poetry on November 2, 2008, finding in this a way to articulate his thoughts and feelings, reflective of his personal experiences in Vietnam, and subsequent readjustment to civilian life. His work was also influenced by  by the veterans he saw at the Springfield Veterans Center, where he worked as a Readjustment Counseling Therapist for over twenty years, retiring in January of 2010.

Some of Mr. Bazzeghin’s work is posted on-line at http://www.iwvpa.net: International War Veterans Poetry Archives, a site for veterans of any nation to share their work.

This is a text widget, which allows you to add text or HTML to your sidebar. You can use them to display text, links, images, HTML, or a combination of these. Edit them in the Widget section of the Customizer.
%d bloggers like this: